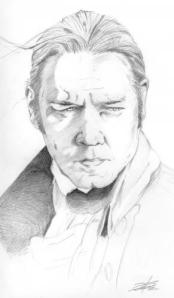 Keeping my secret back-channels open with the Coalition key players often involves scouting for new talent. Malcolm Turnbull calls me to do a background check on Russell Crowe, after the latter tweeted him yesterday urging him to make a bid for the Liberal leadership.

I know little about Crowe except that he is a Kiwi and had an extremely cute wife, Danielle Spencer, whom I am now free to lust after again now that they’ve split. Five minutes on Google is more than enough. Crowe once ripped a telephone off a wall and threw it at a hotel concierge in New York,  pinned a film director against a wall at the BAFTAs and threatened to kill him with his bare hands (“you f****g piece of s**t”), and smashed glasses and hurled chairs in a bar in Alberta, claiming that he would “pound everybody that was standing there,” before picking a fight and brawling with the local villagers. He once pulled a small firearm on a set stylist so that he could get his point across more clearly, starred in a movie called Gladiator, and was recently reported to have beaten up a lot of entirely innocent people in some place called South Park – other than that, there is nothing of further interest about the man.

I let Malcolm know that Crowe is probably of little value to us until after we get in government and start negotiations with the Unions. But with Lakemba and the Gay Lobby in mind, I decide to call my best mate Cory Bernardi and let him know I have just the man he’s looking for.

It's just satire, really.
View all posts by Austeralix →
This entry was posted in Cory Bernardi, Gay Rights, Lakemba. Bookmark the permalink.