Posted on February 7, 2014 by Austeralix 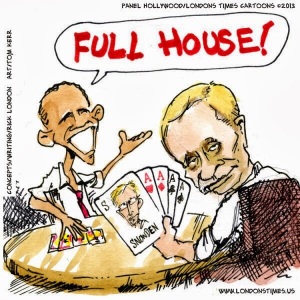 I’m at a loss to explain why President Putin still won’t return my calls.
It’s quite puzzling, really. Even after I promised to stop calling him “Putie-Pute” just in case NSA were tapping his phone as well, I’ve heard nothing back from him for weeks.

A month or two ago I did write to him personally, recommending that the Australian environmental activist should serve his full prison sentence (25 years) after being caught protesting about Arctic oil drilling, and that Julie Bishop doesn’t know what she’s talking about. But I got no response to that either. He obviously decided against my earnest entreaties to treat the activist just like any other Soviet dissident and released the vandal anyway. Perhaps he wasn’t all together welcoming of my intrusion into the Russian affairs of state. Or perhaps it was for a more delicate matter?

Perhaps he decided that, despite the statistics suggesting otherwise, a Greeny Australian might not necessarily be automatically Gay and, upon release, might complain too vigorously about being sodomised in prison every morning in exchange for his daily ration of Borscht.
Quickly call Zhirinovsky again to check my facts, he assures me that sodomy for food demand is no longer the standard penalty meted out to incarcerated Westerners. In fact, it went out the window last year, Z. tells me, when Obama got Putin to drop this quaint tradition in exchange for a promise not to bomb Syria.  When I asked, however, if that included Greenies, Z. quickly changed the subject.

It's just satire, really.
View all posts by Austeralix →
This entry was posted in Green and Gay GetUp! Gestapo, Putin, Sarah Hanson-Young, The Greens and tagged Vladimir Putin, Vladimir Zhirinovsky. Bookmark the permalink.