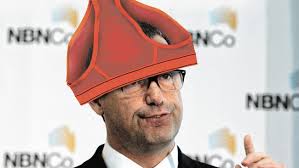 After the outrageous attack on our illustrious General Angus Campbell, my idea of launching an Aussie fatwah against Stephen Conroy for blasphemy seems to be gaining traction. Of course I’ve copied the idea from the Muslim world where, as we all know, they are an everyday occurrence over, er, nothing at all, really. But out of respect for this, perhaps their greatest invention (the other being founding Western civilisation)*, I had the sense to first consult with my good friends Uthman Badar, spokesperson for Hizb-ut-Tahrir in Australia and Waleed Aly, the famous celebrity and author, for their advice.

Both reminded me that blasphemy is a serious offense in the Muslim world and that, for the Fatwah to carry any weight at all, it should end in some sort of nasty retribution, such as the removal of the culprit’s head. Uthman also insisted stoning would also be appropriate – before beheading, of course – but Waleed countered, say, as noted in his  recent book ‘Shariah for Aussie Kids, Vol. 2′, (which I still haven’t bought) it would only be acceptable in Australia if the blasphemer was also a fornicator or a founding member of The Greens.
But, the thought of dealing with Labor party faction leaders in this way being pleasing to the ears notwithstanding, I’m rather keen on a more Australian solution: our own, home-grown,  dinky-di, true-blue Aussie Fatwah, which employs a retribution for blasphemy of which we can all be proud.

Unfortunately, with Australia Day just passed, the opportunity for the most obvious solution of having Stephen Conroy symbolically slow-roasted over an Aussie barbecue spit in front of Parliament House has gone. There, covered in Vegemite, with a jar of a kilo of damper stuffed in his mouth and a Hills Rotary Clothes Line protruding from his rear end, we could have invited the Australian public to come and stand around him for hours laughing, cracking beers, playing two-up and singing ‘Click Go The Shears’ in great merriment as he slowly rotated.
Alas, not to be.

However, that other bonza Aussie event of the year is fast approaching: Anzac Day. So why not have the blasphemer nailed by his bollocks to a dart board in an RSL somewhere and have him get his richly-deserved comeuppance from our good service men and women in that way? On top of that we could also invite new Australians who have probably never played darts before to come and learn, with the object being  not to go for the bull’s eye but to land as many darts in Conroy’s left bollock as possible. Given the cowardly nature of his attack, it goes without saying that either one would represent a very small target indeed.
Taking the typical 21st century Aussiness of it even further, we can also keep Gillian Triggs in the Human Rights Commission and equal rights advocates happy by encouraging these new Aussies to bring along and hurl, not darts, but customary objects which their own traditions would demand under similar circumstances. For example, Vietnamese could hurl Punji stakes, Iranians and Syrians, goat manure, Afghans, their wives, Palestinians, rocks (with the Stars of David firmly, but politely, first removed), and Kiwis, the shattered and humiliating remnants of their latest failed America’s Cup yacht.

If this doesn’t suit the majority then the only alternative would be to have Conroy nailed to the mast on a refugee boat in the middle of the Indian Ocean somewhere, and be repeatedly bashed around the head by a bunch of dead parrots as it sunk. The dead parrots of course being symbolic of the of the fate of his $100 Billion (and rising) NBN network. Alternatively, the parrots could be seen as representing the Labor Party as a whole. Either way, he would get the point.

* Despite Muslim claims to the contrary, suicide belts were first invented by the Tamil Tigers. So fatwahs and the foundation of Western Civilisation remain all we’ve got of any use from them so far.