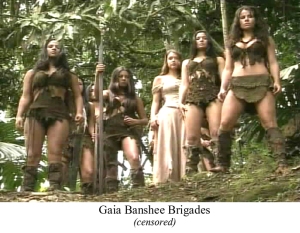 The instant I touch down at ‘Uncle Bob’s Green and Gay International Airport,’ the hopelessly deluded Larissa Waters’ dream of Tasmania’s Utopia is in shatters. Sixteen years of rule by deranged progressives has turned it into Australia’s worst nightmare.

Out of customs and into the main terminal I am immediately overwhelmed by scenes of mayhem and mass hysteria. Fearful of the predicted Liberal landslide, hordes of the Green/Labor faithful have realised the jig is up and are running amok. With piles of their green uniforms and boots ripped from their bodies and thrown to the terminus floor in mass panic, the incensed leftists attack ticketing counters and flight attendants, desperate to get on the first available flight out of the country. Everywhere, the sounds of much wailing and much gnashing of teeth. Many who have given up all hope, choose martyrdom and rush out onto the tarmac, hoping to be cut to pieces by the propellers of oncoming planes. Utter despair at the thought of the imminent arrival of the great Abbott Apocalypse finally arriving on their shores and sweeping away all that is ‘green and good’ before him, there is nothing much more  to live for.

Forcing my way through the crowd I see on the ceiling, dwarfing the countless life-size portraits of the smiling triumvirate leaders, Lara Giddings, Christine Milne and Nick McKim greeting me from the terminus walls, an enormous, mega-portrait of their great and beloved leader, Uncle Bob. Beaming down at me it says, “Welcome To The Green and Mostly Gay Republic of Tassie!”

As soon as I leave the terminus the ugly, blood-curdling sounds of a rioting, half-starved populous with nothing to lose resound in the streets. The putrid stench of poverty – and the deplorable lack of a MacDonalds anywhere – is overwhelming. The great unwashed are in revolt. Crowds of the wretched and the deprived, the jobless and the homeless, all reduced by Green economic lunacy to being dressed in filthy rags, are about to go bezerk. Behind the barricade lines, wild-eyed crones shout angry abuse at me as I pass by them, thrusting their begging bowls in my face, demanding food and money. Others offer to read my fortune or make me a quick and “particularly fashionable quilt” in return for a “quick ticket out of here.”

At the same time, fierce, bare-breasted middle-aged women on horseback ride among them, trying to maintain order. These are members of the notorious Gaia Banshee Brigade, veterans of the Franklin River campaign, famous for being able to knit, quilt and breast-feed three babies  while simultaneously being chained upside down to a logger’s bulldozer. Others are on foot, scanning the crowds, silently fingering one of Christine Milne’s boutique bracelets/garrotes in their pockets, ready to mete out quick justice to any other traitor wanting to escape back to the mainland. One poor emaciated wretch throws himself at my feet, imploring me, pleading desperately for a dolphin-unfriendly salmon sandwich, before being taken away and beaten senseless by a nearby Gaia.

Under extreme duress, I am met by the UN team-leader who tells me that the roads are virtually impassable, overgrown by state-endorsed jungle (i.e., Cannabis Sativa and Cannabis Indica) and littered with the rusting hulks of cars from the pre-Uncle Bob era. Instead, we are forced to use another route, hacking our way through dense undergrowth and giant liana vines with machetes, before we come to a clearing. In the middle of a vast field of suspicious-looking poppies, a waiting helicopter whisks us away to the safety of Cradle Mountain.