The Republic – The Coup de Grâce? 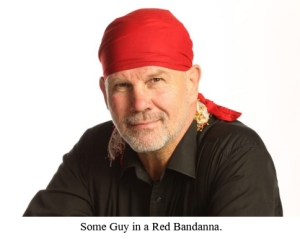 Lets’ face it, appointing some guy in a red bandanna to head the Australian Republican Movement (ARM) was a singular stroke of genius: surely the Australian republic must now be just around the corner? For those of us who have long wanted to free ourselves from the oppressive shackles of perfidious Albion, the decision to select an ex-Rugby playing, commentator and author of puerile rubbish who wears a red bandanna as Chairman to lead the campaign to ditch Queenie, was a brilliant move. Something that will get the debate up and running again in no time. And, if his head-gear is anything to go by, this guy in a red bandanna brings a towering intellect to the debating table, one which will lend charismatic charm and intellectual rigour to ARM’s arguments for the republic.

Demonstrating some of that same charismatic charm and intellectual rigour at his inaugural address, the guy in the red bandanna said: “Pommie-loving stiff-arsed monarchists like that David Flint wuss must be really sh*tting themselves now that I’m in charge.” And, later: “The overwhelming majority of Australians want to liberate themselves from the ‘international embarrassment’ of Pommie rule. Now, from this point on-wards, they can look forward to having the republican cause led by a loud-mouth ‘national embarrassment’ like me. In a red bandanna. (But I’m not anti-Pom.)”

“Wearing a red bandanna also lends a greater respectability to the republican debate,” he claimed, “and it makes me look kinda dignified, like that Che Guevara commie guy. When I first tried the red bandanna on during a holiday in Havana, my son said I looked cool, and not at all like a complete imbecile, so that proves it. Besides, being a guy in a red bandanna now elected as the chairman of the ARM totally clears me of the charge by my critics that all my highly-opinionated, loud-mouth rants published in the media are merely “highly-opinionated, loud-mouthed rants in the media from an obnoxious guy wearing a red bandanna.”

“And just because the likes of David Flint is a gay monarchist who, unlike me, doesn’t support Gay Marriage, shows how bad things really are,” he said. “I mean, I gained a great respect for them Pommie gays back in my old, tight – really tight – rugby scrum days in the 1980’s, though my coach at the time (who was my old friend, Prime Minister Tony Abbott, believe it or not) thought I seemed to be getting much too close to them for his liking. We used to call them Pommie-pooftahs, but they prefer Gay now, so stuff ’em. (But I’m not anti-Pom.)
Them French fly-halves were pretty cute, too. .. Allez les Bleus!”

When asked by the outgoing Chairman what sort of republic he wanted, the guy in the red bandanna said he didn’t know and didn’t care: “Just get rid of the Poms.”

It's just satire, really.
View all posts by Austeralix →
This entry was posted in ARM, Australian Republican Movement, Guy In A Red Bandanna, Peter Fitzsimons, Tony Abbott. Bookmark the permalink.