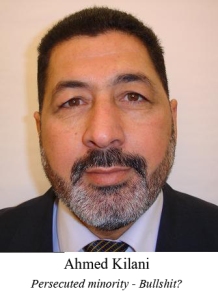 Dismay and disbelief across Muslim Australia today as community leaders condemned Abbott’s latest Islamophobic outrage.  Amid scenes of consternation, of much wailing and gnashing of teeth, reminiscent of much of their community’s grief over the thwarted mass-murder attempt on a train in France a few weeks back, Islamic leaders and their Leftist allies have cried out in horror on learning that 12,000 refugees from a Middle Eastern peace and love cult have hijacked Islam’s ‘persecuted minority‘ protection racket, just so that they can claim asylum in Australia.

“This is our protection racket,” said Sydney Islamic community leader Ahmed Kilany-one. “How dare this Christian cult be allowed to use this pretext too?” he demanded to know. This is our swindle: something we dreamed up a long time ago. It is uniquely ours, something that we’ve practised, repeated, fine-tuned – and patented – over decades, so much that everyone in the West identifies it as uniquely Muslim. And now,” Kilany-one continued, “all that hard work, after years of whingeing, intimidation and grievance-mongering, pulling the wool over people’s eyes, convincing the multicultural lobby that we are just a widely-misunderstood bunch of guys who are not all secretly intent on killing them and the rest of their queer mates at first opportunity  – despite all the evidence to the contrary – has been wasted.

Our genuine efforts to convince everyone that Muslims are nice and peaceful and that it’s everyone else that should be killed (in context), and that we are therefore a persecuted minority, have just been set back overnight by this ignorant, bigoted racist Abbott Islamophobe. Now, with the label being given to a real persecuted minority – which so many of our hard-working mates helped to bring about – how can we expect the Greens and other progressive idiots to shower us with money and suck up to us all the time?”

Continuing his rant a bit longer, Kilany said, “Besides, designating a non-Islamic cult as a persecuted minority is Islamophobic, because it will only serve to disguise Christianity’s own nefarious designs, which is to spread peace and love throughout the world. And if that were allowed to happen, the average man in the street might suddenly compare apples with apples and come to their senses. There is a real danger that non-Muslims might then conclude that Islam is, in fact, genuinely shithouse as far as religions go, and that it should be immediately wiped from the face of the earth. We don’t want that to happen. In fact, it’s the other way around.” Kilevery-one said.