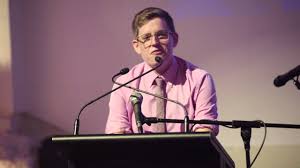 Now, I’ve never met Roz Ward, from the Safe Schools Coalition of Sexual Perverts, but a few people that know this ‘woman’ speak very highly of her. They tell me that, far from being a monstrous, mentally-disturbed, sexually-depraved, Marxist/commie sicko who wants to indoctrinate our kids with all sorts of bizzare, sexually-deviant filth, Roz is in fact, deep down, a decent, very sweet little girl. That she really loves her white, hetero-normative, sexually-binary mummy and daddy – together with this whole awful, wretched capitalist thing – dearly.

And who am I to say that these people are wrong? That the likes of people like Gillian Triggs, and Sarah Hanson-Young – themselves, seditious crypto-commies – who say nice things about Roz Ward, are somehow mistaken? Who am I to denounce her, with absolute certainty, that she’s some kind of  monster?

All I know is that, after declaring on Facebook her secret desire to plant the red flag over Victoria’s Parliament House, and resigning, that makes Roz Ward a self-confessing whistle-blower, and so she can’t be all that bad.* Notwithstanding, of course, the absolute certainty of her also being a monstrous, mentally-disturbed, sexually-depraved, Marxist/commie sicko who wants to indoctrinate our kids … (etc.)

So, Roz Ward’s done us all a big favour.
All we need now is for her sympathisers in the Victorian Government – including the contemptible and abject, LGBTQIA-bullshit-grovelling Premier pinko, Daniel Andrews – to do the same. That is, they all need to blow the whistle on themselves, and resign, en masse, for the same reasons. And those reasons are, of course, for being a bunch of monstrous, mentally-disturbed, sexually-depraved, Marxist/commie sickos (etc.) who secretly want to plant the red flag over Victoria’s Parliament House.

In that way they, and Roz Ward, can leave our children alone and, along with the rest of the Safe Schools Coalition of Sexual Perverts, fuck right off out of mainstream Australia for good. Let them carry on with their monstrous, mentally-disturbed, sexually-depraved Marxist/commie sicko (etc.) stuff in the privacy of their own homes. Or, better still, while incarcerated in a state mental institution somewhere. In a lunatic asylum: custom-built, specially designed to cater for the perverse, pinko lunatics that they all are.

And Roz Ward can take her white, hetero-abnormative sexually-binary (at the time) mummy and daddy with her because, like Dr Frankenstein, they gave life to this sick little monstrosity in the first place.