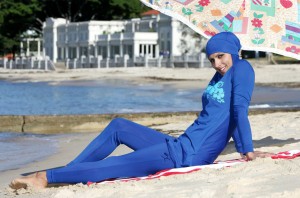 As a dinky-di Aussie, a difficult question to answer.
Which is: “What was the greatest achievement in the history of Western civilisation that occurred yesterday and worth celebrating the most?
Was it,
(A) Kyle Chalmers’ 100m free-style gold medal win in Rio?
Or,
(B) The Mayor of Cannes’ decision to ban Burkinis on all French Riviera beaches?

Hmmm, a hard one… An Aussie Gold medal? Or banning a disgusting eyesore and Islamist trojan-horse from the beautiful shores of La belle France?

So I rang up a few typical, dinky-di Aussies to get their views.
Waleed Ali was unavailable for comment. Neither was his wife, Susan Carland. Nor was Keysar Trad, or Mona Shindy. Nor was Mariam Veiszadeh, or Sheikh Shady Alsuleiman, or Randa Abdel-Fatta, or Sarah Saleh, or that Hizb-ut-Tahrir prick, Uthman Badar. And former Imam, the saintly old Sheikh Taj El-Din Hamid Hilali, said he didn’t know the answer but whichever left the most meat uncovered was good.
(Answer on a back of a post-card, etc.)