Punishment To Fit Her Crime(s) 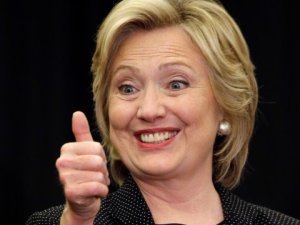 DING DONG, THE WITCH IS DEAD!
(Well, not entirely)
Finally! The prospect that this vile, treacherous woman would ever be leader of the Free World has been well and truly shattered after she was totally shafted by the arrival – just in the nick of time – of Western Civilisations’ equivalent of a knight in shining armour coming to the rescue, Donald J. Trump. Hillary Clinton and her toxic, diabolical, progressive globalist agenda brought to a crashing halt: torpedoed, blown out of the water,  by this, possibly the greatest man in all of Christendom.

But Clinton’s defeat was so utter, so humiliating, perhaps it is just too cruel to want to lock her up and throw away the key forever. Au contraire, I say, au contraire. Given what she’s gotten away with so far, throwing her in prison is far too good for her, far too lenient. There’s just nowhere near enough pain involved.

So here are a couple of suggestions.

1. Burning her at the stake.
Although the practice has long gone out of fashion, let’s help give it stage a come back in popularity by rounding up and nailing a few of her similarly demented female counterparts (Gillard, Merkel, Elizabeth Warren, Sarah Hanson Young, etc) at the stake would surely give it added appeal as a public spectacle. And the thought of thousands – if not millions – of Hillary’s tearful, die-hard supporters, offering themselves up as martyrs and voluntarily tossing themselves on fires all around the country might afford it more universal acceptance More so, if these were to be some of the very same vacuous women who took that idiot Madeline Albright’s advice and voted for Clinton just because she was a woman. And rounding up and adding to the inferno those celebrities now reneging on their promises to move to Canada if Trump won is bound to provide much merriment.

Let’s ratchet it up (and admittedly get a little more nasty) by looking further afield for inspiration. I know: how about we try the Middle East (where Hillary has contributed so much for us by fucking the place up even more)?

2. Gang rape followed by murder. (Yes, I know, it’s an awful suggestion, but please hear me out.)
In parts of the M.E. we find that gang-raping wayward women before brutally murdering them is pretty popular among many of these people. In fact, to many of them (just about the entire male population of Sunnis) it’s quite a hoot. Highly entertaining and quite justifiable, in fact, to these very same people who Hillary would have liked to see more of migrating to the US, enriching the Americans with their culture. (Yes, I mean those ones.)

And being gang-raped before being murdered was the fate – as we all know now – of the US Ambassador (Chris Stevens) that Secretary Clinton completely abandoned in Benghazi a couple of years ago. It was also the same fate of tens of thousands of defenceless Yazidis and Christian women and children at the hands of ISIS in 2014 – the plight of which Madam callous-bitch-Clinton didn’t give two hoots about because none of them had ever donated to the Clinton Foundation, so why should she?

And of course gang-rape is also considered by many of Clinton’s Wahhabi donor mates as a perfectly reasonable way of dealing with wayward, immoral women. For that reason, is it not the case with the Saudis’ that this wicked “Wall-Street Hooker,”  who has regularly touted her political services to them over the years, is completely immoral and deserves to go to hell??? Especially after swindling them out of tens of millions of campaign funds underwriting her failed bid for the White House? Shouldn’t Madam Sluttery Clinton, failed presidential candidate, be forced to do the decent thing and admit she’s nothing more than a two-bit whore and hand herself over to the Saudis to get her just desserts (that is, cultural enrichment, Benghazi-style)?

Wouldn’t that be a great way to put more smiles on the faces of millions of American taxpayers (especially the countless numbers of blue-collared workers she’s helped put out of work) and save Donald’s new administration millions of dollars in prosecution and incarceration costs alone?

Or am I being just far too hard on Hillary?
Am I being too vicious (yes, probably) about how to deal with this lying, calculating, shameless bitch who has grown rich (alongside her equally perverted husband) by repeatedly circumventing American law, doing secret deals with the most toxic countries in history? Specifically, a double-dealing, treacherous, Western liberal heretic who has raked in the cash by the bucket load by prostituting her services to those sick Wahhabist fanatics in Riyadh? That is, a mendacious, treasonous, money-grubbing floozie doing the bidding of a poisonous news of vipers whose greatest wish is nothing more than to at last see the caliphate flag casting its long, dark shadow over the White House lawn in Washington? Or should we just let her go free and hope she gets run over by a bus?

(Answers on the back of a postcard, etc.)