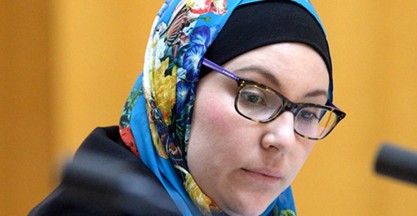 Lydia Shelly is plainly a hideous woman.
Donning a burqa instead of the hijab, however, wouldn’t disguise the type of hideousness I’m talking about, but it might help her anyway. That is, it might help shut out of her sight the millions of Australians that she apparently hates so very much.

Shelly’s hideousness becomes immediately apparent each time, in her appearances in the media. she denounces the “haters and bigots.” Those haters and bigots she sees in evidence each time she switches on the TV or learns about the latest election results.

A brief foray into the realms of Lefty-land (The Drum, The Conversation, The New Matilda, etc) finds Shelly dismissing in the same way everyone else who won’t agree with her. 10s of millions of people voting for Brexit, Hanson and now Trump. It can only be hatred and bigotry. The the counter-terrorism legislation and the Australian police operations acting to thwart the mass-murderers she is so eager to excuse. Hatred and bigotry. And only racist Australia’s entrenched hatred and bigotry can possibly explain why 49% of the country agree with Sonia Kruger not wanting to risk turning a future Australia into a cesspool of perpetual Jihadism.

Attacking people with different opinions from her as hate-filled bigots shines a spotlight on Shelly’s own monumental bigotry and deeply-entrenched hatred. But as we know, both hatred and bigotry are part and parcel of being aligned with the double-headed hydra she decided to nail her colours to when (aged 21)  she crossed over to the dark side. In fact, as we all well know by now, they are prerequisites.

Easy enough it is to rudely tell Lydia Shelly to stop whingeing and bugger off back to where she came from (Boggabilla, NSW, where she grew up as a Catholic). So I’m going to request she dons a burqa and politely f**ks off to Afghanistan instead. There she can experience first-hand what bigotry and hatred really is. Particularly if she suddenly finds herself one day being whipped by the religious police for having a hair out of place.

If this were to come to pass, fingers crossed, then this supreme Islamist dupe might be reminded of something she must have heard at least once in her early life before she crossed over from the light (to become the hideous, hate-filled bigot that she is.) And that is, that it was Catholic Spain early in the 17th century which first realised that the only way to stop Muslims from murdering and trashing the place was to kick them all out. It would be then that I’d ask her: “Seeing how places like Afghanistan have turned out, Lydia, doesn’t Catholicism, now, really make much more sense?”