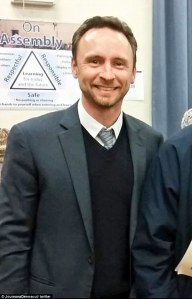 Chris “Quisling” Griffiths
(Where are you Chris?)

In the appendices of my forthcoming bestseller ‘Why wiping all Muslims Off the Face of the Earth May Not Work’, I list the names of those with which, on the contrary, the idea just might be feasible. Top of this ‘exemption list’ are the treacherous white converts, such as the cowardly (now-in-hiding) ex-Principal, Chris Griffiths.

Griffiths is the contemptible quisling who tried to derail the introduction of NSW Government’s Deradicalisation program into his ‘The Little Head-Choppers Boys Training School’ (a.k.a., Punchbowl Boys High). Details on how the relevant authorities should hunt down, find and deradicalise filthy fifth-columnists like Griffiths are also in my book’s appendices. (See the ‘With a Pack of Half-starved Alsatian Dogs’ section).

But out of compassion, and in celebration of Australia’s Year of The Muslim BABE!, I have magnanimously decided to exclude from the exemption list those converts who are ostensibly not always dealing with a full deck. That is, with one kangaroo short of a paddock. Principally, that group of female Aussie converts (Susan Carland, Lydia Shelly, etc.,) who apparently went out of their way to prove Muhammad’s point that women are mentally deficient by eagerly signing up.

As we know, those women who disprove Mohd’s theory, but with similar ideas (blowing Western Civilisation the fuck up), have long realised that it’s better to stick with The Greens. At least they have trees to go home to and hug at night. That is, as opposed to (despite being babes) being stuck with often extremely ugly and extremely  hairy men who fret and babble incessantly in their sleep about where the next drone, the next pack of half-starved Alsatians or their next Gold Logie is going to come from.