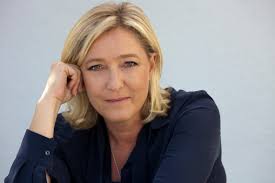 It’s been a bad news week.
Bad news that that Erdogan autocrat, megalomaniac and Islamist par excellence seems all set now to install himself as caliph in 2019. Bad news that, having his bid to join Europe thrown out – if he gets his way and brings back the death penalty for the secular opponents he calls ‘terrorists’ – won’t make a blind bit of difference because Erdogan’s still got Europe lined up for a shafting with the 3 million Syrian refugees he’s holding back, all ready to let loose.
Merde (as Marine would say)

Bad news, also, that only one, single ISIS terrorist was killed after his attack on the cops on the Champs-Élysées because French intelligence services estimate that there is still at least another 11,000 of them still to go. Bad news that at least 30% of France’s 5 million Muslims sympathise with them in some form or another. Bad news that the only hope they have (Marine Le Pen) will probably not win the Presidency and that La Belle France is probably now, as a consequence, well and truly shafted.
Merde, merde, merde, as Marine would say (among other things).

Bad news that Islam’s blasphemy laws helped the Islamist Anis Baswedan get elected to govern Jakarta, the most populous city of a Muslim country located only 200km from the Aussie mainland. Bad news that his Christian opponent, Ahok, was way ahead in the polls before Anis played the blasphemy card. Bad news that Ahok subsequently go thrown in gaol for that very blasphemy (saying it’s okay for Muslims to vote for him) and that the visiting US VP Mike Pence still praised the country for its moderate form of Islam.
Merde (as Marine again would say.)

But the really, really, REALLY bad news – at least for someone like me, sitting at home, gleefully watching, over and over, YouTube footage of jihadists accidentally blowing themselves up – is that Waleed Aly is tipped to win his second Gold Logie tonight. Anticipating the nauseating waves of adulation and suck-holing from fawning luvvies that will ensue should such an obscenity eventuate, I have a stack of sick bags at the ready.

It’s so unfair. If only I had the Photoshop skills to replace the YouTube jihadist faces with that of The Project’s closet-jihadist life would be so much more bearable, and more full of “Joie de vivre,” as Marine would say.

It's just satire, really.
View all posts by Austeralix →
This entry was posted in Uncategorized. Bookmark the permalink.