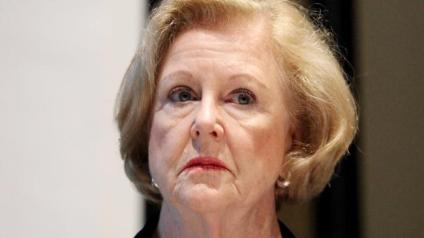 With the despicable Triggs’ imminent departure today from public office, who on earth is going to mourn her passing from the political stage?

Surely not those who have long recognised Triggs as nothing less than a crazed, neo-Stalinist cretin? A maniacal Marxist apparatchik who is now, finally, being put out to pasture? An unlanced carbuncle on the Australian body politic, whose sole raison d’etre (at least according to her sick,  poisonous ideology) was to police and to crush all opposition to the Left’s imposition on Australia’s sensibilities of a perverse, multicultural straight-jacket?

Surely she won’t be missed by those who counted her among the unelected swill that has shut down free-speech in Australia, preventing sensibly-minded people from wanting to, as a matter of course, denounce her as the out and out commie trollop that she is? Surely she won’t be missed by them, even if they wanted to just denounce her in purely factual terms, such as ‘that f**king Triggs commie’, leaving off the word ‘trollop’ so as not to offend her too much, but still making her feel just as gutted as she must have felt when her QUT case got thrown out, or when her humbug was exposed in the Senate and she was proven to be a serial liar? (But mostly because ‘trollop‘ might not be provable in court.)

No she won’t be missed by those at all. Or by any other sensible people.

And surely she won’t be missed by those, who, like me, instead merely wish a complete pox on all her houses, past, present and future? Or those who similarly hope that, like Banquo, the ghost of Bill Leak will come to regularly haunt her, this lying, dissembling, free-speech murdering cow: haunting her during her every waking moment?
No she won’t.

It's just satire, really.
View all posts by Austeralix →
This entry was posted in Gillian Triggs and tagged Gillian Triggs. Bookmark the permalink.