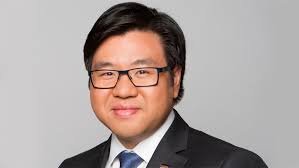 Those who will mourn Triggs’ passing belong to the rogue’s gallery of Leftist shits that really run Australia, chief among whom will be that tin-pot, Franco-Lao side-kick of hers, Tim Soutphommasane.

Representing yet another un-lanced boil still affixed to the Australian body politic, Uncle Tim is unlike hundreds of thousands of other otherwise loyal, hard-working Aussies with Asian descent who are willing to knuckle down and contribute to the country without complaint. Instead, this ungrateful little turd (for that is what he is) prefers to regularly turn on the white hands that initially welcomed him in, snapping, snarling and biting at them like a mongrel dog.

Declining to take a hint from that Sudanese imbecile Yassmin Abdel Maglied (who just buggered off to London to find out if their entire population agrees she’s an imbecile too), Soutphommasane doggedly remains in country. Apart from periodically complaining about the excessive whiteness in the skin colour of those in charge here, he relentlessly scours the newspapers and airwaves looking for anything that deviates one iota from the progressive party line, and to justify the monumental perversity of drawing a $300,000+ salary regularly touts for race-hate business predominantly from the very same white Australian tax payers he seeks to prosecute at every opportunity. Yes, the same tax-payers who let him in in the first place.

Timmy recently moaned about ignorant (white, no doubt) people not being able to pronounce his ridiculous surname, reportedly throwing up their hands in despair, before resorting in the end (my guess) to ‘Fuck-Knuckle’. To be sure, given his official title of Race Commissioner, ‘Fuck-Knuckle’ seems pretty appropriate and slides easily off the tongue. Additionally, it’s a quaint Aussie nickname, reserved for presumptuous little twits, and sensible Aussies will rightly agree that only a ridiculous, tin-pot, possibly Gay panjandrum could possibly object to it.

I suggest, however, that given the powers Comrade Tim Fuck-Knuckle wields, enabling him to summarily ruin anyone for the slightest transgression of speech, perhaps the name ‘Tim Il Sung’ would be far more appropriate and just as easy to pronounce.

Further, I’m willing to speculate on how Tim Il Sung’s manifest hatred for whities is regularly reinforced: every morning while shaving. The reflection of that smug mug of his serving as one of those yellow ‘post-it’ notes, apparently stuck permanently on his bathroom mirror serves as a constant reminder, with every glance, that the little fucker who owns that face can gaol or bankrupt at the drop of a hat anyone who dares utter a word within earshot that evenly remotely sounds like ‘chink‘ . Unlike some of those North Korean commies he’s inspired by, however, he still can’t have them shot for it. At least not yet.

But the downside for Tim Il Sung is that this morning, yellow ‘post-it’ note also serves as an unfortunate reminder that the owner of the said face still can’t have people of any race (round-eyed or otherwise) locked up, much less shot, for remarking on the uncanny resemblance he bears to his just as chubby, just as ideologically deranged and just as repulsive North Korean namesake. No amount of repression and litigation is going to hide that fact.